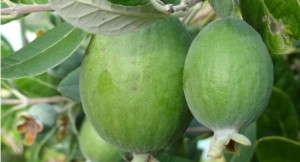 Also known as the Pineapple Guava or Guavasteen, feijoas are truly delicious. They resemble large green eggs. Cut them in half and scoop out the pulp in the middle, as you would eat a boiled egg.

Feijoas can be used in many ways. They can simply be eaten fresh, made into wine, added to fresh fruit salads or cooked in puddings and cakes.

Although you cannot eat the skin of a feijoa fruit raw, you can use it as an ingredient in preserves. When you cut into a feijoa, you will see thick, juicy flesh that is either light yellow or white in color. Additionally, approximately thirty edible seeds are present within the flesh. The feijoa fruit is also known for its fragrant and long-lasting aroma with tropical overtones including pineapple and guava.

The fruit has good levels of Vitamin C (50mg/100mg of flesh) and dietary fibre. One fruit will provide 23% of an adult’s daily need. The feijoa is from the Myrtaceae plant family and is native to Brazil and Uruguay. The fruit is not the only delicacy of this plant – the showy bright red flowers add life to salads or chocolate log.

Feijoas are especially popular in New Zealand, where they flourish. Here are some feijoa recipes from the Waikato Times:

Bring two cups rose wine and a half cup of sugar to boil, simmer 3-4 mins. Add a dozen or so peeled and halved feijoas and poach for about 10 mins until tender. Serve with lashings of whipped cream! Yum!

For every 1.5kg of peeled feijoas you need 1.25kg sugar and the juice of two lemons. Peel, weigh and chop the fruit, dropping pieces into water acidulated by a jot of cider vinegar.

Put prepared fruit in saucepan with lemon juice and cook gently until feijoas are tender. Add sugar and stir to dissolve, then boil until setting is reached. Decant into warm sterilised jars, cover to seal while hot.

Dash of cinnamon (optional)
Cut the feijoa in half and scoop flesh into blender.

Whizz for a few seconds then add other ingredients and blend about 30 seconds until frothy.

Makes about one glass.

3/4c pulped/blended feijoa
– Boil the water and sugar together for 5 minutes.

– Pour into a tray suitable for freezing and freeze until firm.

– Turn into chilled bowl and beat until light, working quickly to avoid melting.

– Return to freezer without stirring and leave until very firm.