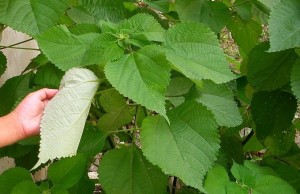 Ramie – both edible and useful

Available: spring, summer and autumn.
Ramie (Boehmeria nivea), also known as China Grass, Chinese Silk Plant, White Ramie, or ‘La Gai’ in Vietnamese, is a hardy perennial belonging to the Urticaceae or Nettle family. The true ramie has large heart shaped leaves covered on the underside with white hairs that give it a silvery appearance.
Ramie is used as a food colouring (chiefly to make black rice cakes), a food flavouring, and a textile. When cut, it wilts quickly, which is why we usually offer it air-dried.

Source: Vietspices.blogspot. By Loan aka Annette 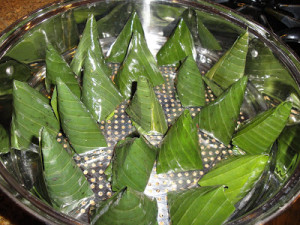 “Banh It La Gai (Little Ramie Rice Cakes) are made from five main ingredients: glutinous rice flour, gai leaf, sugar, mung bean and banana leaf.  Banh It La Gai has the sweet taste of sugar, the aroma of sweet rice, the spice of ginger, the starch of mung bean, bitter taste of gai leaf and the grassy perfume of banana leaf.  All of these ingredients bring out a refreshing flavor and a distinctive glossy deep black color that gives the cake its unique look.

“The name Banh It La Gai indicates the two common features of the cake: “ít” means “little” referring to the size of  a serving for it only takes a couple bites to finish off a cake, and “lá gai” refers to the pointy serration of the  ramie leaf commonly found abundantly in the tropics of Vietnam.

The ramie leaves are green but after you grind them in a mortar or blender, the green colour will turn darker.  Once you steam the cake, the colour will turn black.  The process of making Little Ramie Rice Cakes may not look appetizing but the finished product is  pleasing to the palate.

According to the people of Binh Dinh province in Vietnam, the ingredients in Little Ramie Rice Cakes not only taste good, but are also good for you; they can prevent abdominal pain and keep your stomach warm, and the ash from ramie leaves can be used to cure gas pain.

Banh It La Gai also plays a large role in Vietnamese rituals. This cake is always offered to worship ancestors during the New Year festivals. In marriage rituals, a tray of Banh It La Gai is the gift of the bride’s family to that of the groom to show the skillfulness of the bride who has made it together with the help of other villagers. 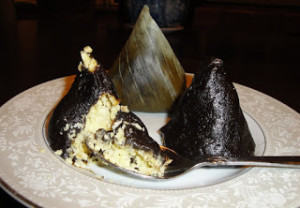 Filling
225g (1/2 pound) of mung beans, soaked for a couple of hours or overnight
1  cup of sugar
1 cup of frozen or fresh shredded young coconut
1 teaspoon of pomelo flavour  or vanilla extract
Oil

Making Dough
Boil 2.25 cups of water with brown sugar and salt to make syrup. Remove it from heat and let it cool down.
Wash ramie leaves and removed the hard line in the middle of each leaf.  Bring them to boil for about 15 minutes.  Drain it and squeeze out the water.  Put ramie leaves and ginger in a blender and blend with a little bit of dissolved sugar until the texture is super smooth.  Set aside.

In a mixing bowl, mix well together  flour, ramie paste, syrup and vanilla extract.  Kneed if for about 10 minutes until dough is soft and it doesn’t stick to your hands or the mixing bowl. If during the kneading process, dough is still dry, add a little bit more of water in the dough and knead it again.

In a pot, add water about 1.5cm (1/2 inch) above the beans and bring it to boil. Reduce the heat to low, stir it and cook with lid on for about 15 minutes or until soft. Mash it. Add sugar, shredded coconut and vanilla extract. Mix it up well. If it’s too dry, add a little more of hot water. Cool the mixture to room temperature. Divide beans paste into balls, equal in number to the dough balls.

Flatten a ball of dough.
Take a bean paste ball, put in the middle of the round flat dough.
Close the dough and roll it with your palms to make a ball. Brush oil all over the ball before wrapping it up, so that the cake will not stick to the banana leaves after steaming.

Fold a piece of banana leaf into a cone shape. Drop the ball dough into it.  Fold in four sides. Steam the rice cakes for about 5 minutes or less.
Remove them from the steamer.  Enjoy.

Note: If your Little Ramie Rice Cakes  are not as black as they are supposed to be, you probably didn’t use enough ramie leaves.
You can  view images of ramie being processed the traditional way here. The extract of the leaves is a very dark green, and needs to be concentrated to get the almost-black colour.

Ramie as a Textile 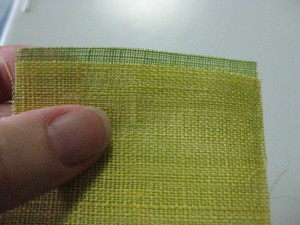 Ramie is one of the oldest textile fibers. It was used in mummy cloths in Egypt during the period 5000 – 3000 BC, and has been grown in China for many centuries. The main producers of ramie today are China, Brazil, Philippines, India, South Korea and Thailand. Only a small percentage of the ramie produced is available on the international market. Japan, Germany, France and the UK are the main importers, the remaining supply is used in the country in which it is produced.

Ramie fiber is very durable, is pure white in colour and has a silky luster. It is reported to have a tensile strength eight times that of cotton and seven times greater than silk. In Yichun, China, handmade ramie fabric has been described as “light as cicada’s wings, thin as paper, flat as mirror, slender as silk”. The yarn is very finely spun from long-hand prepared ramie fibre, which is knotted together to make very long thread. It is then hand woven into a transparent fabric. In South Korea, where there is a museum of ramie cloth, this fabric is called ‘mosi’.

Advantages of Ramie as a Fabric

Ramie fabric is resistant to bacteria, mildew, alkalis, rotting, light, and insect attack. It is extremely absorbent and therefore comfortable to wear, especially during warm weather. It has natural stain resisting ability with ease of stain/soil removal similar to that of linen (and this is better than cotton). It is not harmed by mild acids. Dyes fairly easily. It has good wet-fastness in laundering – though dark colors may lose their vibrancy over repeated launderings.

Wikipedia (18.3.2015): “Ramie is used to make such products as industrial sewing thread, packing materials, fishing nets, and filter cloths. It is also made into fabrics for household furnishings (upholstery, canvas) and clothing, frequently in blends with other textile fibers (for instance when used in admixture with wool, shrinkage is reported to be greatly reduced when compared with pure wool.) Shorter fibers and waste are used in paper manufacture. Ramie ribbon is used in fine bookbinding as a substitute for traditional linen tape.”

Ramie is more difficult to process than other bast fibres because the fibres are held together by gummy resins that do not decompose easily. The usual retting process used for flax and hemp is not effective with ramie. The processing needs to begin as soon as possible after the stems have been cut, otherwise the resin hardens and becomes difficult to remove.
Ramie fibres are obtained by decortication, a hand or mechanical process in which the bark and the adhering fibre are separated from the stalk and soaked in water, allowing the fibre to be scraped from the bark.