Corn (Zea mays) is also known as maize. In addition to being delicious, nourishing and fun to grow, corn, particularly the coloured varieties, is highly ornamental; cobs can be dried and used as decorations in the home.

Heritage, or heirloom varieties of corn are far less sweet than modern cultivars, which is to be expected, their value being a lot broader than just sweetness of grain. Keeping varieties pure and saving seed is now very important. To save heirloom corn seeds, plant each variety at least two kilometres apart or at least at one month intervals to prevent cross-pollination.  Plant in blocks as plants need to be close for wind pollination.

There are many categories of corn. The five main ones are Sweet Corn, Flour Corn, Popcorn, Field Corn and Flint Corn. Other categories include Waxy Corn, Slender Corn, Ornamental Corn, and Pod Corn. 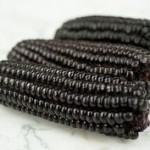 A beautiful black corn, it dates back to the 1800’s in the seed trade, but is the corn grown by the Aztecs over 2000 years ago.  It’s a good choice for corn meal or flour, a beautiful decorating corn, and can also be eaten as a fresh corn when picked in it’s milk stage.  A real multi-purpose corn. 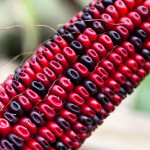 There are basically two types of popcorn: round pearl kernels usually produced on large ears and sharp-pointed rice kernels usually produced on small ears. Pearl type (what you usually find commercially) produce large whole hulls when popped. Rice types produce smaller popped corn but it is tender and has little or no hull (that thing that gets caught in your teeth). Rice types are especially prized by home gardeners or can be purchased in specialty shops.The modern varieties of yellow and white popcorn have been bred and altered to produce large yields, easy harvest and popping volumes. Heritage varieties sacrifice all that to grow varieties that focus on taste, texture and overall eating quality. 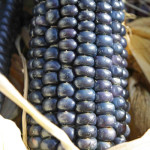 Higher in starch and lower in sugar than table corn, the type of corn eaten as a vegetable. One of the most cultivated crops around the world. In addition to being used as a source of food for humans, dent corn provides corn starch and other byproducts. Some people also call dent corn “field corn” to distinguish it from table corn. 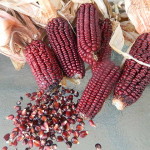 This is a rare heirloom variety producing medium sized cobs with red kernels. The ancient variety was once used by the Aztecs.
Sowing time – Spring-Summer (or when soil temperature is more than 20 degrees C) Must have full sun position, sow 25mm deep, emerge 6-10 days
Harvest 90 days.

For living decoration in the garden or, dried and preserved for use in the home. For these purposes, variegated and coloured leaf forms as well as those with colourful seeds are chosen. Examples: Indian Ornamental Corn, Japonica Striped Maize. 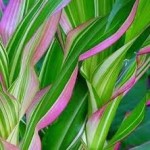 Flint corn is very hard and gets its name from flint, a hard type of stone. The colors of flint corn range from white to red.  Flint corn is commonly used for industrial purposes and livestock feed.

Pod corn is seldom used as food but is often grown as a decorative plant; each kernel is enclosed in its own set of diminutive husks.

Some seed companies suggest that this is the better known strawberry popcorn. An example would be the cultivar ‘Fraise Rouge-Brun’. Slender Corn is an annual grass from South America with tall stalks covered with long, narrow, fresh green leaves. The ornamental strawberry-like cobs contain numerous small reddish brown seeds. These are edible when still unripe and soft, but they are usually used ripe and dry for decoration purposes. Easily grown in any rich, well drained soil in full sun and plenty of watering during the growing period.