At The Fruit Forest we grow almost 40 different, named varieties of heirloom figs. Why so many? Because each variety has its own, unique characteristics.

Nineteenth century nurserymens’ catalogues listed dozens of fig varieties, many of which are now lost. Each variety had something different to recommend it – for example:

These days only a small handful of fig varieties are sold commercially. In the plant nurseries, for example, you will generally find White Adriatic, Preston Prolific, Brown Turkey and Excel. In the fruit-shops you will generally find figs with vague names like ‘Black Fig’, which gives no clue as to the fruit’s heirloom name or story. And each heirloom fig does have a story, also called its ‘provenance’. 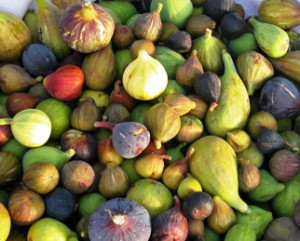 Take the Mission Fig: more than two centuries ago, in 1768, Franciscan missionaries voyaged from the Balearic Islands in Spain to San Diego in Southern California, U.S.A. They carried with them some cuttings from their favourite fig tree. Father Junipero Serra planted these cuttings at the San Diego mission settlement, and the cultivar became known as ‘ Mission’.

The Franciscans propagated this fig in the subsequent missions they established along the California coast. It was so delicious and so prolific that the early padres and missionaries in the Pacific coast States cultivated no other variety of fig. ‘Mission’ later became the main commercial variety planted throughout California.

It was brought to Australia during the latter part of the 19th century when, especially after the gold rushes, there was great uncertainty about which cultivars of fruit would succeed in the Australian colonies. In response, fruit nurserymen made concerted effort to import as many different varieties of fruits from the rest of the world as quickly as possible. Cuttings of a large numbers of fig cultivars were imported from all over the world.

At the Fruit Forest we are growing the amazingly delicious fig ‘Mission‘, or ‘Black Mission’ as it is sometimes called.  Some of our other figs include:

Want to know more about heirloom figs? Read this book!